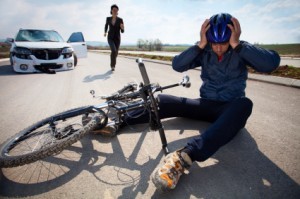 What is the most dangerous sport that leads to the highest number of injuries?  You may think mixed martial arts or football, maybe even ice hockey. But a Newport Beach bicycle accident lawyer knows that the leading sport (recreational, professional or functional) for injuries is bicycling. If you have sustained injury in a bicycle accident, contact Russell & Lazarus APC today.

According to the Governors Highway Association in 2014, California led the nation in cycling deaths. From 2010 to 2012, six states, including California, made up 54% of cycling traffic deaths. Although bicycle deaths account for 2% of the deaths involving motor vehicles nationwide, they account for a little more than 4% of motor vehicle accident-related deaths in California.

According to the Insurance Institute for Highway Safety (HS) / Highway Loss Data Institute (HLDI), there were 722 bicyclists who were killed in crashes involving motor vehicles in 2012.  The majority (73%) of those who died were male and older than 20.

65% of the bicyclists killed in 2012 were reportedly not wearing helmets. And of the 65% killed, 18% of them did not know they should be using helmets.

These statistics do not include bicyclists who received non-fatal serious injuries or minor injuries. An experienced Newport Beach bicycle accident lawyer knows that the most common causes involve another vehicle.  Often times, the collision with another vehicle occurs at a road junction due to either the driver or cyclist, or both, failing to look properly before continuing into the road junction.  This includes when a motorist emerges onto the path of a cyclist or turning across the path of a cyclist.

Another common cause of bicycle accidents is when the cyclist rides into the path of a motor vehicle, often riding off a pavement.  This could also occur when both the bicyclist and motorist are moving in the same direction. The bicyclist, while turning his or her head to look behind, will accidentally move the bicycle directly into the path of the motorist.

Cyclists often get into accidents while making right turns from a major or minor road.  Often, if the cyclist is going fast, while turning right he will make a large arc, going into the middle of the road and, possibly, moving into the path of either an oncoming vehicle or a vehicle moving in the same direction.

Oddly enough, another common cause of bicycle accidents, especially in urban areas, is when a cyclist is unable to stop in time when a motorist opens his or her vehicle door.  This happens more often than one may think and could lead to serious or fatal injuries.

Another common cause of bicycle accidents resulting in fatal injuries involve the cyclist having consumed alcohol and was tested to have a BAC level of 0.08 or higher.

Children injured or killed in bicycle accidents are usually due to them playing or riding too fast.  Often times, children will lose control of the bicycle.

Who’s At Fault in a Bicycle Accident?

Both the cyclist and the motorist have a duty of care to obey the laws of traffic and ensure that they are not putting others in danger. There are no automatic determinations of fault, however. Typically, bicyclists sustain serious injuries in accidents with motor vehicles while the drivers of those vehicles do not sustain any injuries at all. However, if the driver has not observed the proper traffic laws, they will not only be responsible for paying their own medical expenses, but they could be held liable for whatever property damage they do to the driver’s car.

In cases where the driver is at fault, they and their insurance policy will foot the tab for the cyclist’s injuries. This includes lost wages and pain and suffering on top of their medical expenses.

Determining Fault in a Bicycle Accident The single most important question that must be answered is: did either party break a traffic law? If the answer is yes, then that constitutes very strong evidence that the blame lays with them. What if there is no clear indication that the bicyclist or the motorist broke any traffic laws? Then it must be determined if one of them behaved carelessly.

The sad truth is that the majority of bicycle accidents happen because either the driver or the cyclist was distracted. Texting while driving, playing with the radio or the infotainment system, and inebriated driving, are all common causes of the car accidents with bicyclists and pedestrians. The same can also be said of bicyclists. Bicyclists who ride their bikes under the influence of alcohol are not only more likely to fail to yield the right of way, they are also less apt to pay attention at intersections. In addition, they injure pedestrians (and themselves) when they are riding either under the influence or distracted by their phones.

When neither the driver nor the bicyclist was obvious careless or violating traffic laws, the process of determining fault in a bicycle-car accident can become quite complicated. Often, the police report becomes the first official documentation of the accident. This can include witness statements and sometimes the accident is caught on camera. Even then, there may be some dispute as to fault.

In some cases, both parties may have contributed to the accident happening. In this case, either party can be assigned some of the blame. This is known as comparative negligence. In some states, an injured party may only bring a lawsuit if they are less than 51% at fault for an injury. But in California, an injured party can bring a lawsuit even if they are 99% at fault.

This is known as a “pure comparative negligence” rule. This means that even if you’re mostly at fault for an accident with a vehicle, you can still collect damages from the driver. However, your damages are diminished by the percentage of blame that you are responsible for. For instance, let’s say that the court determines that a driver is only 25% responsible for an accident, and you have $10,000 in damages. The driver will only be on the hook for $2,500.

Nonetheless, you can recover something so long as the driver contributed to an accident.

Here’s an example of a lawsuit in which a driver may have contributed negligence. Let’s imagine that Joe is riding his bike up the street. Joe gets a text from Jill, his new love interest. Rather than waiting to reply, Joe decides to text her back while he’s riding up the street. His bike then collides with a car at an intersection. While Joe is clearly at fault for the accident, let’s also say that Bill, the driver, was speeding when he went through the intersection. Bill was speeding because he wanted to beat a red light.

In this case, both individuals were negligent. But since Bill was speeding he still has to pay some portion of Joe’s damages.

Injuries to the head range from fatal skull fractures and brain damage to minor concussions and cuts. The more serious injuries usually result in permanent damages or death.

What Safety Measures Should You Take?

There are a number of ways a bicyclist can take safety measures, including wearing reflective gear and a bicycle helmet.  Newport Beach bicycle accident lawyers also recommend bicyclists to familiarize themselves with hand signals to notify drivers if and when they will be making a left or right turn.  Rear view mirrors on bicycles will also help cyclists to view oncoming vehicles without needing to turn their head. They can therefore avoid accidentally turning the handle of the bicycle, causing the bicycle to move into oncoming traffic.  Reflective gear on the bicycle wheels and/or a headlight in the front of the bicycle will also help cyclists be more visible to motorists.

Cyclist’s behavior will also help save them from injury or death.  Remember, bicycles are vehicles too and are subject to traffic laws (e.g. tickets speeding, failing to yield, failing to stop).  Thus, cyclists should slow down or stop when necessary.  They should also not consume anything that may impair their judgment.

What Is California Helmet Law?

Helmet use is estimated to reduce head injuries by 85%.  California requires bicyclists and passengers on the bicycle who are under 18 to wear bicycle helmets while riding a bicycle.  The helmet must meet the standard of the American National Standards Institute, Snell Memorial Foundation’s Standard for Protective Headgear for Use in Bicycling, or the American Society for Testing Materials.  The helmet must also be properly fitted to the wearer of the helmet.  Newport Beach bicycle accident lawyers have seen cyclists or passengers of bicycles fined up to $250.00 for failure to wear a helmet in accordance with California law.